Meghalaya is a part of Indo-Burma biodiversity hot spot and identified as key area for biodiversity conservation due to high species diversity and high level of endemism. It has attracted the attention of wildlife enthusiasts and research scholars from all over the country. The rare and highly endangered Clouded Leopard is the State Animal. Other carnivores found here are Leopard, Leopard cat, Jungle cat, Golden Cat, Marbled Cat, Dhole or Indian Wild Dog and Indian Wolf.

There is also a notable recordof Galiforms found in the State like the Khasi Hills Partridge, Khaleej pheasant, Jungle fowl and the most elusive Peacock pheasant.

Every year migratory flocks of Teals, Pintails, and Cormorant (great cormorant) visit the State. The streams and rivers also support a considerable amount of wildlife. The Golden Mahseer, which has disappeared from other rivers and streams due to excessive fishing, silting of riverbeds and pollution of water can still be found in the river Umtrew. The rare Khasi Hills Terrapin and the Asian Brown Tortoise are also recorded.

Amur Falcon is a small raptor of falcon family. Amur falcons breed in South-eastern Siberia and Northern China and migrate west through India and across Arabian Sea to Southern Africa to spend their winter making a round trip of at least 20,000 km every year travelling between their breeding and wintering ground. They make a stop at Tyrso village in Ri Bhoi district which is about 75 km from Shillong during the month of October for roosting. They usually stay here for a month or so before resuming their annual migration. The Department with the help of Tyrso Valley Wildlife Protection Society an NGO involved in the protection of Amur falcon are sensitizing people through awareness campaigns. A unique Amur Falcon festival is organized by the NGO during November to give space for the birds and to create awareness. 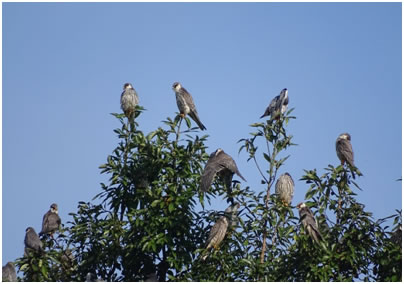 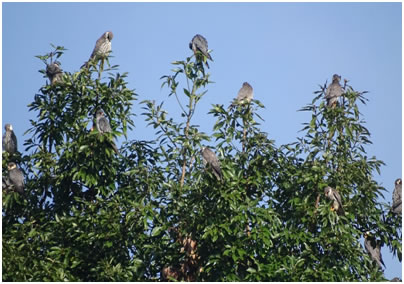