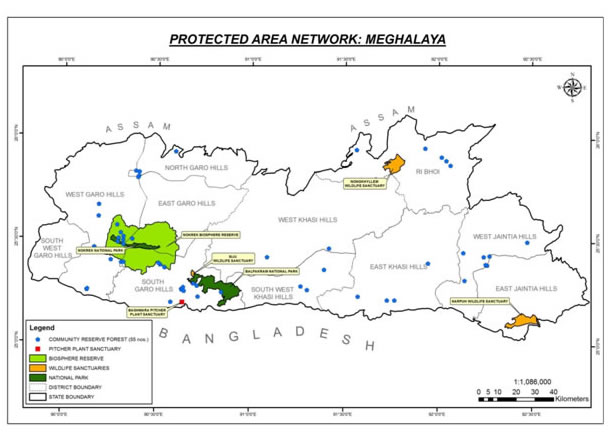 Certain wildlife bearing areas of significance, comprising of the buffers of PAs, viable wildlife habitats and important corridors which are not under direct government control, have been identified for management as biosphere reserves and elephant reserves as shown below. In these areas public co-operation and participation in conservation programmes are imperative for achievement of management objectives.

UNESCO added Nokrek National park to its list of Biosphere Reserves in May 2009. Nokrek Biosphere Reserve covers an area of 820 Sq.Kms.  The Reserve is one of the least disturbed forest tract of Sub-Himalayan range. The park is home to a variety of animals, birds and pheasants, beside some rare and endemic flora. Important animals found here are Indian Elephant, Hoolock Gibbons, Capped Langur, Stump Tailed Macaque, Clouded Leopard, Leopard, Gaur, Sambar, Barking Deer, Himalayan Black Bear, Sloth Bear. Many species of birds can also be spotted here and the national park is considered to be an important bird area and an ideal spot for bird watchers. Citrus indica which is mother of all citrus fruit in the world is endemic to this place and the locals call it by name memangnarang ('orange of the spirits'). Nokrek is also believed to be the home of Mande Burung (jungle man or ape man) and reported cases of sightings found in and around the villages of Nokrek. 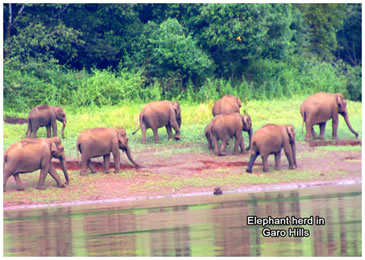 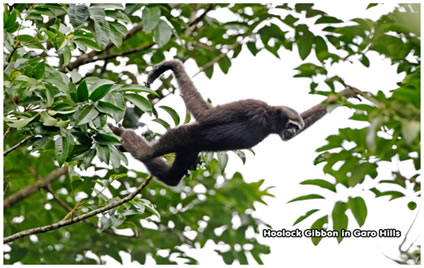 The literal meaning of Balpakram is the “land of perpetual winds”.  Balpakram is famous for its forest covered canyon-cum-gorge and numerous geo-physical formations, all of which makes the place a land of mystery. It is often compared to the Grand Canyon National Park of the United States of America, to the local Garo inhabitants, Balpakram is the abode of the spirits of the dead. It is believed that here, the spirits of the dead dwell temporarily before embarking on the final journey. The park consists of a succession of hills and valley with constant abrupt variation in altitude, aspect and gradient. The deepest gorge is the Mahadeo gorge, locally known as Kundulop with drop of over 600 meters. The most prominent physical feature of the park is the bullock hump shaped Chitmang peak or Kailash, rising to a height of about 1023 meters. 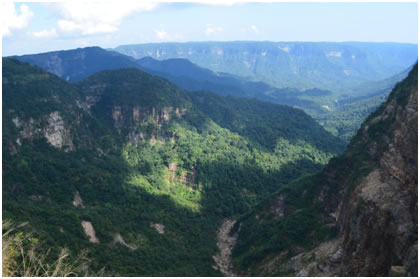 Mystery of Balpakram
Balpakram has many mysterious and unnatural phenomena that cannot be satisfactory explained by modern science and logic. Some of the mysterious sites are Boldakmatchukaram, Chitmang peak, Matchru, Arengpatal, Goncho Dare, Dikkini ring, RongsaljongAgal, RongsobokRongkol. Indeed, Balpakram is so steeped in myths that even the Hindus believe that it is a sacred place. They believe that when Laxman was seriously injured in the war, a very rare lifesaving herb was required, Lord Hanuman found it here but not knowing which to take, broke the top of the hill and carried it away. The missing portion of that hill became a deep awning canyon.
Conservation value:
Stretching between an altitudinal zonation of 100 meters to well over 1027 meters, Balpakram National Park harbours a rich and diverse gene pool. It is home to many rare and endemic animals. The National Park is home to Elephants, Tigers, Sambar, Barking deer, Gaur, Clouded leopard, Red panda, Black bear.
Tour Time
The Park is open to visitor from 1st of November to 31st of May every year. The Park is open to visitors from 5 A.M. to 4 P.M. from the month of November-February and 5 A.M. to 6 P.M. from March-May. 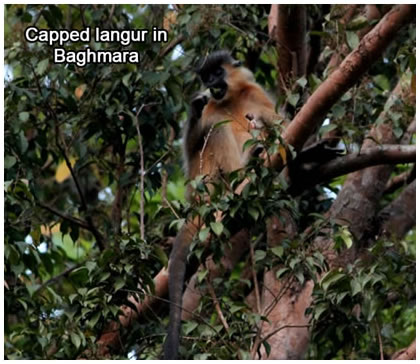 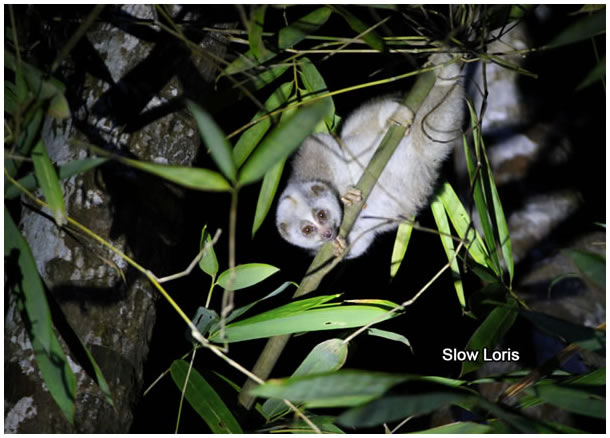 Nongkhyllem Wildlife Sanctuary
Area :29.00 Sq.Kms
Location: Ri-Bhoi District, about 53 km distance from Shillong and about 51 km distance  from Dispur.
Gazette Notification and Date: No.FOR.25/81/5,Dt.25-03-1981
Conservation value:
The Sanctuary falls in the Eastern Himalayan Global bio-diversity hot spot. This area is rich in Floral and Faunal wealth. It has attracted the the attention of wildlife enthusiasts and research scholars from all over the country. J.Joseph, who compiled the flora of Nongpoh and its vicinity in 1982, noted about 1036 taxa of vegetation belonging to 639 genera of 159 families in a study area of about 200 Sq.Kms. He stated that a unit of the South Indian Forests of the Western Ghats, another bio-diversity hot spot, harbors less number of species as compared to these forests.
The first ever bird survey carried out by Shri Anwarruddin Choudhury of the Rhino Foundation of India in this Sanctuary from April, 1996 to October,1998, recorded over 400+ species of bird. The survey revealed the presence of endangered species such as the Rufous Necked Hornbill.
The area harbors over 50 species of mammals and 25 species of reptiles. Out of 140 species of mammals listed in Schedule I of the Wild Life (Protection) Act,1972, about 30 species are found in this Sanctuary.

Area :59.9 Sq.Kms
Location: East Jaintia Hills District, about 78 kms distance from Jowai and about 155 kms distance from Shillong.
Gazette Notification and Date: No.FOR.128/2013/20,Dt.10-06-2014
Conservation value:
The Narpuh Wildlife Sanctuary is the only large tract of pristine forest left in both the East & West Jaintia hills District as well as the eastern part of Meghalaya. This area has some of the tallest evergreen and semi-evergreen forest left in Meghalaya. The Sanctuary is also home to many Schedule I species such as Hoolock gibbon, Serow, Slow loris, Pied Horn bill, Leopard etc.
The favorable climate with rich vegetation offers a good habitation of the area to support a wide variety of wild, endangered Flora and Fauna, the Sanctuary is endowed with a rich diversity and abundance of wildlife. Till recently only few studies has been conducted to explore the Fauna diversity in the Sanctuary, the studies conducted so far are as follows:-

Birds :- About 92 species have been recorded so far. Among the noteworthy species recorded so far includes, Oriental Pied Hornbill, Giant or Great Pied Hornbill, Spangled Drongo, Rufous-throated Partridge etc.
Butterflies :- The Sanctuary has a number of small nullas, streams etc. which harbor a rich variety of Butterflies, Dr.RajkamalGoswami during his studies in the Sanctuary has recorded around 91 species of butterflies. Some of the butterflies are very rarewhich can be located only in the Sanctuary. It can be stated that the Sanctuary is exceptionally rich in butterfly diversity.
Reptiles :-The Asian Leaf Tule(cyclemis dentate), a poorly known testudine was recorded in Prang and Lukha rivers. the Copper headed Trinket Snake, Red-necked Keelback, monitor lizard and species of frog(Kaloula spp.) have been recorded from the region. The Common Varanus bengalensis, water monitors, Rock Python, King Cobra, Common Cobra, Banded krait, Common krait, Common vine snake, Green pit viper and reticulated python have also been recorded.

Siju Wildlife Sanctuary
Area :5.18 Sq.Kms
Location: South Garo Hills District, about 45 kms distance from Baghmara, 160 kms from Tura and about 475 kms distance from Shillong.
Gazette Notification and Date: No.MFG.66/4,Dt.30-03-1979
Conservation value:
The oldest and the first Wildlife Sanctuary of Meghalaya located in the remote Garo Hills region of Meghalaya. Sharing its border on the Eastern part with the Balpakram National Park and blessed by the longest river of Meghalaya, the Simsang, as neighbor on the Western part, is home to many endemic rare flora and fauna. It also shares its border with the Balpakram-Baghmara and Siju-Rewak elephant Corridors within its Southern periphery. Siju Wildlife Sanctuary came into existence in 1979. Earlier the area was declared Reserved Forest by the Lieutenant-Governor of East Bengal and Assam in 1906.
the origin of the name of Siju Wildlife Sanctuary (SWLS) could be tracked back from its location in the village named "Siju". Thus the name "Siju Wildlife Sanctuary". Siju is a fast growing village dominated by Garo subtribe known as "Attong".
Although, the Sanctuary is very small in size - covering only 5.18 Sq.Kms, but its flora composition is of primary origin. many wild animals such as Elephants, Barking Deer, Sambar Deer, Wild Boar, Tiger, Clouded Leopard etc. are well represented in the Sanctuary. At least 5 species of primates - Hoolock Gibbon, Stumped Tailed Macaque, Langurs, Slow Loris and Rhesus Macaque are recorded. Popularly regarded as the "Bird Sanctuary", the area offer many enchanting migratory birds encounters inside the Sanctuary such as Siberian Ducks, Spoonbill, etc.

Baghmara Pitcher Plant Sanctuary
Area :2.7 hectares
Location: South Garo Hills District, Baghmara about 112 kms distance from Tura and about 332 kms distance from Guwahati railway station.
Gazette Notification and Date: No.FOR.79/84/5,Dt.24-05-1984
Conservation value:
The Baghmara Pitcher Plant Sanctuary is named after the location of the Sanctuary and Pitcher plant, Nepenthes Khasiana a rare insectivorous plant which is being protected and conserved in the Sanctuary. The Pitcher plant is locally known as "Me'mang-Koksi" (Me'mamg = Ghost; Koksi = Basket). The locals, Garos regard it as a sacred plant or the Ghost basket.
Nepenthes Khasiana is the only endemic species of genus Nepenthes that occurs in India, and in Meghalaya State. Also, the species is the only Pitcher Plant found in India. The species and its habitat are unique, as it occurs with an isolated population in Meghalaya. It can be said that the species represents ancient endemic remnants of older floras which usually occur in landmasses of geological entiquity(Palaeoendemic)(Bramwell,1972). Hence, the species is of great biological interest. Its rare status gives it a very high ecological importance.
the Baghmara Pitcher Plant Sanctuary(BPPS) is the only Sanctuary in Meghalaya where in-situ conservation of Pitcher Plant is being carried out. Although the area is very limited, plenty of Pitcher plant grows luxuriantly. the very objective of the establishment of Baghmara Pitcher Plant Sanctuary is to protect and preserve this rare, endemic and threatened in nature for generations. The vegetations of the Sanctuary provides home to small animals such as squirrels, foxes, mongoose, lizards, snakes etc. in the heart of the town. The Sanctuary also protects soil erosion and provide water to section of the surrounding villages.
Besides, Pitcher Plant, many endemic flora and fauna are found in Baghmara-Balpakram Landscape. Infact the area has high level of endemism. The Pitcher Plant(Nepenthes Khasiana) and Drosera etc. are endemic species. These have the best chance of survival in Baghmara-Balpakram landscape.

The State of Meghalaya has a sizeable number of elephant populations. These are not contained within the Protected Area network which are under the direct control of the State Government. A significant population of elephants resides outside the Protected Area network. The elephant because of their long ranging movement, need for shelter and food requirement, move from one block of forest to another which lie in fragmented form. The area outside the Protected Area network is interspersed with human habitation. It was therefore considered essential to define a management unit which acknowledges presence of human being along with the elephant, prescribing management practice synergizing the need of both the components. The thrust of management in such areas is eco-development works to improve economic status of human being, anti-depredation activities to reduce man animal conflict and habitat improvement programme to divert the movement of elephants. One such Elephant Reserves in the Garo Hills region under the Centrally Sector Scheme of Project Elephant has already been notified vide Government of Meghalaya Notification Number 132/ 2000/ 97 dated 31st October 2001 measuring a total area of 3500 sq kms approximately.