For forest fire protection purpose, the State Government has constituted the State Crisis Management Group (SCG), with the Chief Secretary as the Chairman and other members, as directed by the Ministry of Forests, Environment & Climate Change, Government of India.

Similarly, the department has constituted the Crisis Management Cell for Forest Fire, headed by the Principal Chief Conservator of Forests & Head of Forest Force (PCCF & HoFF). A total number of 14 Divisions have been entrusted to look after the forest fire crisis within all the 11 districts of the State. Of the 39 C&RD Blocks within the State, a minimum of 3 C&RD Blocks each division hasbeen allotted through their respective Ranges and Beat Offices, for the purpose of forest fire protection only, through the involvement of the community by creation of Village Forest Fire Control Committee (VFFCC).

In line with the National Action Plan on Forest Fire (NAPFF) of the Ministry, the State Forest Department has completed mapping and zonation of fire risk zone in the entire state. The same has been provided to the FSI for real time dissemination of fire incidences information as detected by the Satellite.The detected incidences were regularly sent by the FSI to the Department on daily basis. Others effective measures as envisaged in the NAPFF are being carried out and executed by the Department from time to time as per the approved Crisis Management Plan.

To mitigate and to give effective measures on forest fire protection, the Department has prepared the Crisis Management Plan, and the same has been approved by the Ministry. This documentation include the time schedule of work plan, digitization and documentationof the fire prone maps, role, strategies, mechanism and evaluationof forest fire within the state. Revision of the same subject to the direction of the Ministry.

In order to bring more community participation to combat forest fire,the 14 Nos. divisions have created a total of 343 number of Village Forest Fire Control Committees (VFFCCs) within the State, concerning to those highly fire prone areas. Moreover, there are about 366 Joint Forest Management Committees (JFMCs) created under N.A.P who helped the Department to combat forest fire, especially in their respective plantation areas. Awareness were being conducted regarding the effect of fire and the result of global warming, etc.

The Department has setup a control room at Headquarter with well-equipped facilities. Control rooms for the divisions and ranges, where fire prone are high were also being set up, for quick communication on forest fire alert points. Prompt action on satellite forest fire alert points received from FSI were being forwarded through these control rooms daily to the concerned Division, Range, field staff and VFFCC/JFMC members, as soon as received from the FSI in order to combat, evaluate and report such incidences at the earliest.

The group of VFFCC members who perform well in fire protection were given incentive annually as an honorarium to them.
Most of the forest fire incidences reported during fire season are from jhum cultivation and broom grass burning.This is due to the forest dependent people,who intentionally clear and burn the particular forest area for their jhum and bun cultivation purposes. And due to difficult hilly terrain,therefore, these types of forest fire incidences were very difficultforimmediate evaluation/assessment, though the fire points detected by the FSI.

The 5% of forest area under the direct control of the government are regularly manned by field staff. As such, any fire incidences in case occur under these areas are immediately doused within a very short time.However 95% of the other forest areas outside the government control are difficult to evaluate on real time basis due to shortage of man-power and hilly terrain. 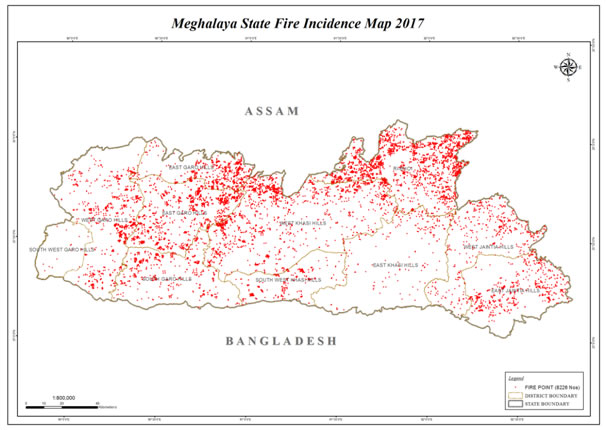