Sacred Groves are the tracts of virgin forests that are left untouched by the local inhabitants and are protected by the local people due to their culture and religious beliefs. Sacred groves are relic vegetation of once dominant flora. They are repositories of our rich biodiversity; they are also the last bastion where the rich culture and the customs of the indigenous people are still preserved.

In Meghalaya, sacred groves represent an age old tradition of environmental conservation based on indigenous knowledge, culture and religious beliefs. Sacred Groves originated in Meghalaya since time immemorial much before the advent of Christianity. They are unique feature of Khasi and Jaintia Hills. They are among the few least disturbed forest patches which are serving as the natural treasure house of biodiversity and a refuge for a large number of endemic, endangered and rare taxa. A baseline floristic survey revealed the presence of at least 514 species representing 340 genera and 131 families in these sacred groves.

As part of religious beliefs, an estimated 1,000 sq. kms of  forest areas (Survey carried out by the Regional centre of NAEB), under the administrative control of District Councils have been preserved through the ages by the indigenous tribal communities as ‘sacred groves’. There are 125 Sacred groves in Meghalaya.These forests with areas ranging from 0.01 to 900 hectares are unique features of the state.

The local tribal people believe that ‘U Basa’ or goddess dwell among these thick and virgin forests. Various rites and rituals are performed periodically in these forests. According to their belief that pleasing ‘U Basa’ through sacrifice of animals (pig, goat, cow, buffalo and fowl) together with performing dances, the Basa will protect their villages or clans from famine and other sufferings or bad omens and keeps the evil spirits away.

In the past, people did not dare to enter or destroy these forests. It is interesting to know that till date, in some sacred groves, people are not allowed even to pluck twigs of plants, use wire or steel, wear shoes/ slippers take photography or attend a nature’s call. No timber of forest produce shall be removed for sale or trade but allowed for religious purpose.

Apart from being repository of rich bio-diversity harboring many rare, endangered & threatened plant species including rare medicinal and aromatic plants, sacred groves are living example of strong symbiotic relationship between the forests and indigenous tribal population of the state.

The District Council has entrusted the management of sacred groves to the Lyngdohs or religious priests. Sacred groves shall be registered with District council.

Mawphlang sacred grove, located in East Kahsi hills District, 25 km from Shillong is internationally known and important tourist destination and educational centre. It is spread across 78 hectares and protected by the local deity-Labasa. 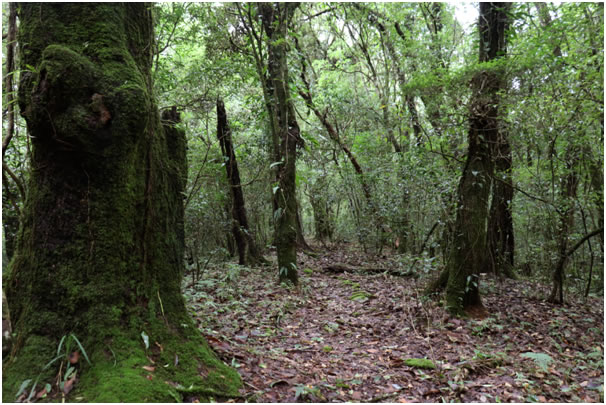