Reduction of Emission due to Deforestation and Degradation (REDD+) PILOT PROJECT was also implemented in Raid Umket in Ri Bhoi, District from  2015-2017. Redd+ Pilot project was implemented at Raid Umket, Ribhoi District as forests under this Raid are facing degradation mainly due to felling of trees for timber, fuel wood and forest fires. Following are the activities carried out in implementation of this Pilot project: Creating awareness in the community: After finalising the site, the next step was to create awareness among the community people about the concept of REDD+. Meetings were conducted with the villagers of the Raid wherein information on climate change, impacts of climate change on natural resources including forest and also the role of forests in mitigating climate change was given with the help of lectures and audio visual media. Interaction with the villagers was done in their own dialect. Creating awareness sets the stage where we gather feedback and ideas, get to ask questions and importantly seek the understanding as to why we are doing it. Flyers were distributed to every household, giving them insight about REDD+ and its activities.

2. Socioeconomic Survey: In order to understand socio-economic conditions of the people, their dependence on forests, income levels, literacy, livestock, occupational pattern etc. a complete survey of all the households in the Raid was conducted. A predesigned questionnaire was used for the socio-economic survey. Summary of information from the questionnaire to provide an overview profile of the villages is presented in the following sub sections.

4. Forest Inventory: Forest Inventory in the Umket Raid and village forests has been done following Stratified Random Sampling approach. For this, forest cover map has been used as strata map with dense forest and open forest as two strata. Forest inventory was done on these strata based on random sampling method with 18 sampling plots in open forest and 26 sampling plots in dense forest in area proportion to size.

REDD+ activities involves performance based payments for enhanced carbon sequestration from forests. These are essentially connected with the measurement and quantification of such activities. The reference level serves as a reference point from which reductions of emissions from deforestation or forest degradation, or increase in sequestration through improved forest management plan or enhancement of carbon stocks are measured against. The current and actual efforts of the mitigation activities can be compared using the reference level throughout a pre-determined time frame.

Reference level as business-as-usual takes into account the historic data and deductions are then made using these data. BAU baselines refer to the quantity of Carbon emission without any mitigation action. Following REDD+ interventions, such as improved forest management plan and other mitigating activities, projections are made.

6. Tree plantation activity: An innovative participative approach was followed in the plantation activity. Since vacant lands where plantations can be raised are not much available in the Raid. Vacant lands in the open forests (of the community forests) were identified in the form of small plots using Google Earth image. Each plot was then assigned to a family for raising plantations on these, after their expression of willingness. Plantations on the plots of lands were raised by the families for which they were paid financial incentives as per the norm and based on the measured and verified performance. Using Google Earth and ArcGIS, 8.8 ha of suitable land were identified for plantation activities in both the Community and Village Forest. A total of 200 sampling plots were generated for laying down the models for tree plantation with an area of approximately 324 sq. m each.
50 tree saplings were planted in each plot with a spacing distance of 2-3mx2-3m from one another and 3m or more distance away from matured or well established trees in order to avoid competition for water, light and nutrients.

Fire is the most destructive factor threatening the forest of the region. These fires occur during the months when the forest floor is covered with a thick layer of leaves.  Once started, such fires become almost unmanageable and destroy large tracks of forest everywhere, suppressing natural regeneration. In order to prevent and control forest fires, early protection and control of such fires is essential. The following activities will be used to control this driver of deforestation:

Customary laws prohibiting lighting of fires in the forests areas should be made more stringent and smoking and carrying of matchboxes in the forest area in the fire season banned.

8.   Introduction of Improved Chulhas : Traditional three-stone open fire and mud chulhas consumed high quantity of firewood for any cooking purpose. At the same time, they produce a lot of smoke, soot and other suspended organic matter within the house. This can cause an increase in health related problems mainly affecting the lungs and eyes of those family members who are constantly engage in cooking activities.

The benefits of smokeless chulhas include 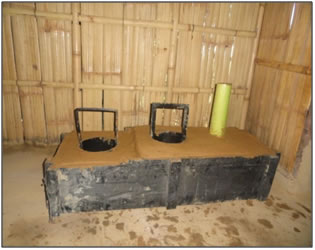 Improved Smokeless Chulhas have been incorporated in the six villages falling under the project area. These villages include Umket, Umtung, Palwi, Mawdwar, Nongtarian and Bangla Nongtraw.  From each of the six villages, five family households have been identified by the village headman in installing the aforementioned smokeless chulhas. Among these identified families, one master trainer from each village was selected to undergo training regarding the construction of improved smokeless chulha.
An Awareness and Training programme in collaboration with the State council of Science Technology and Environment, Shillong was organised at Umtung village where the six master-trainers from each village were given a brief practical training for construction of an improved smokeless chulha.

10. Installation of Solar Lights within the Umket Raid 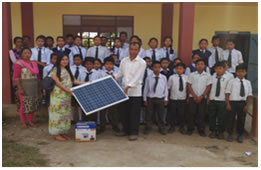 In the Socio-economic survey, it was found that 20% of the households within the Raid Umket lack in electricity connection. Another concern is the erratic distribution of electricity where the Raid experiences hours or even days without electricity. Poor availability of electricity causes hardship to the students who are unable to study. Students are not the only ones affected by a lack of proper lighting. Farmers and artisans are also affected by this since they are unable to work in the evening. One way of overcoming this adversity is the installation of solar lights. It is a renewable form of energy and it does not cause any air pollution. The Solar light system consist of a solar panel, LED bulbs, battery and a charge controller.These solar light systems have been installed in all the six villages in the Raid Umket viz. Bangla Nongtraw, Mawdwar, Nongtarian, Palwi, Umtung and Umket. They were installed in the Community halls/Schools in the villages. Installation of solar light systems is one of the entry point activities done in the six villages who actively participated in the REDD+ pilot project.

11. Released of a Project Design Document of  REDD+ Pilot Project in Raid Umket:- 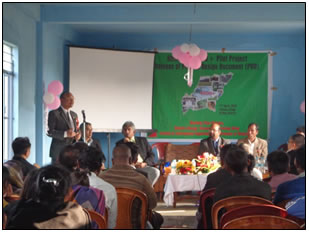 A Project Design Document was prepared and released which can be a useful guiding document in future capacity building programmes on REDD+ and also in implementation of community REDD+ projects in the State and elsewhere.